Schools Conference at the Thurrock Campus has ‘X Factor’

STUDENTS from six local schools were given a workshop by make-up artist to the stars and South Essex College lecturer, Danielle Everitt.

Over 70 students from the Grays School, Deanes in Rayleigh, the Billericay School, The Gateway Academy, Grays and St. Cleres and Gable Hall both in Stanford-le-Hope took part in the theatrical make-up workshop where they learnt how to apply TV and screen make up as well as gory special effects such as cuts and bruises. 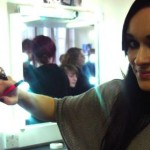 Danielle said: “The best thing about the course is that it covers so much, from prosthetics to special effects and wig making. I can speak from experience and say that you really do learn so much which gives you more opportunity to decide what you want to specialise in. Today the students have had a taste of what they would learn and they’ve really enjoyed it.”

Danielle studied the VTCT Level 3 Theatrical Special Effects and Media Hair & Make Diploma at the College and graduated in 2007. Throughout her time at the College she tried to gain as much work experience as possible and had her first paid job as a make-up artist on a Marks and Spencer’s Christmas advert a month after leaving the College.

She said: “I’ve been working in the industry since I was studying here at College so I’ve made lots of contacts and often organise for industry professionals to come in and give workshops. When I get make-up jobs I’ll often take the girls from my class with me so they build up their experience too.”

Organised by Marketing and Aim Higher in Learner Services, our schools conferences aim to signpost careers paths for secondary schools students and raise aspirations while giving them a taste of college life.

She continued: “I think the students here today have been really surprised to learn that there are lots of men that work in the make-up industry, particularly prosthetics which is predominantly male. Schools conferences are a real chance to give young people an insight into careers paths they may never have considered before but find they really enjoy.”

While Danielle refused to say how much make-up Simon Cowell needed or how much of a diva Cheryl Cole was she did let us in on how big professional make-up artists’ bank balances could be.

She said: “It can be a competitive industry to get into but it’s well worth it. Once you’ve earned your stripes it’s well-paid and you get the chance to travel all around the world. Commercials are the most lucrative; the make-up artists in the Max Factor adverts earn around £2000 a day for that job.”

The Performing Arts Schools Conference also saw students take part in a Musical Theatre workshop with Adam Gaskill who has starred in ‘We Will Rock You’ and acting and dance sessions with South Essex College tutors Nick Rutherford and Vicky Saunders.