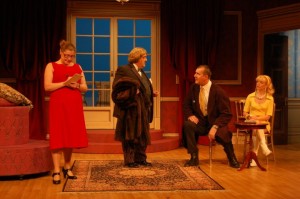 Over 20 years ago Thurrock Courts Players produced one of their all time great shows when they performed “NOT NOW DARLING” with Courts stalwarts including Vic Gray, John Scowen, Martyn Williams, Mandy Kirby and the late great Rodney Powell.

I arrived at the theatre this evening expecting that the current cast of the same show would not be a patch on the original, BUT I was so wrong. The current cast with only John Scowen retaining the same role and Martyn Williams swopping the make up for the director role was magnificent and at least equal with the originals.

John Scowen was once again brilliant with his comic timing and facial expressions, Is there no character that he cannot do? It is not fair that one man has so much talent and the ability to make people laugh so much. while Wayne Prince gave a performance that I did not think he would be capable off. It is not the sort of role that Wayne usually does but he excelled in the part of Gilbert and played it to perfection.

Mike Jones was frightening as Harry McMichael. I was scared of him and I was only sitting in my seat, a very convincing performance.

Karen Reeve gave a faultless performance as Janie McMichael. Her delivery and presence were worthy of a much bigger stage. Her stripping of her clothes was done in a very clever and discreet way. I would not like to get on the wrong side of Lisa Chapman judging by the way she played Maude, I know she was only acting, but she acted if it was real. In fact I felt sorry for Arnold and Gilbert by the way she shouted and bullied them. Another convincing performance from Lisa who is proving to be a great asset to the group.

Trevor Povey’s bewildered Commander worked beautifully alongside Jill Snellings portrayal of Mrs Frencham . Nicole Povey was delightful as Harry’s mistress and she vamped and purred in just the right places. Tracy Carsberg took on the role of the shy Miss Tipdale. This was a larger than usual role for Tracy and she handled it well although she must work on her projection and delivering lines as a question. Newcomer Michael McFarlane did well in a small role and we look forward to seeing more of him in the future. We’d also like to see more of the gorgeous Monika Zieba as well who looked great in the tiny role of Miss Whittington.

Martyn Williams direction was superb. One could tell that he had spent many hours working on the delicate moves because timing and the comedic moves are vital in making this show a success.

It was good to see Courts back to doing what they do best. This week has seen the best audiences for years and every audience member went home happy. They will have attracted a whole new audience to the Thameside and the trick now is to deliver again. Perhaps the darker, cleverer plays should be left to others and let Courts concentrate on what they do best. They tackle” A Farndale Avenue” farce next and on tonight’s performance this should also be a cracker. A great night out well done to all concerned.