Although from watching the news and what I saw broadcast about Libya was nothing compared to what I’ve discovered has been going on through the internet. This is because trying to report on the story in Libya is impossible. News stories about Libya are mainly based on what they have found out from relatives of those there.

Protesting in Libya is illegal, but after the unrest and success of Egypt, an opportunity was seen. To start with, thousands took to the streets Benghazi. Witnesses claim that peaceful protestors were forcefully removed from the streets by authorities and others talk about the police shooting into crowds and seeing protestors fall down after being shot.

The internet has been blocked, as protests were being set up via social sites. But the people that managed to make contact have claimed that over 500 people have been killed within the first few days, tear gas has been used to control crowds and that police are now randomly shooting.

Sara said: “No one knew how we lived in Libya. Well, I love Libya because we’re like one big family and we’ll always stick together, but education levels are terrible, hospitals are just – terrible, NO WORDS TO EXPLAIN. Libya just lives in a messed up society because of him.

“We are NOT ALLOWED to mention his name – if you do, you will get police in front of your house dragging you away. He killed people even before the protest – he killed so many and he keeps them all in underground prisons.”

On the 22nd of February, hundreds of Libyans took the streets of London (near Downing Street), chanting things like “David Cameron, don’t you care, Libyan blood is everywhere!” The purpose of the protest was to try and make a point and show respect.

Sara also attended the first protest in London (the 22nd) She said: “There was about 250 people maybe more and we stood behind barriers and we all chanted things in Arabic and English. We had this English man come to us, he gave us a speech and we all cheered for what he said, all we want is freedom and rights and we want to LIVE like normal people so this protest made us release all the stress out there – to show our appreciation for all the loved ones that passed away.”

Even though writing a blog on what’s happening isn’t going to change things, it’s spreading the word. Hopefully the people of Libya will be able to have political freedom that they deserve soon. 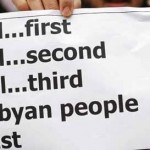