One, two, three for Kai.

ESSEX Indoor Championships saw a show of Thurrock talent at the Lee Valley Indoor Centre last weekend. The small contingent of Harriers athletes came home with more than a handful of medals.

Kai Riley Laborde successfully managed to juggle three events in a tight schedule, winning gold in his strongest event, the Shot Putt, silver in the High Jump and bronze in the Hurdles. 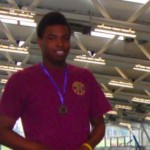 Robbie Clarricoats, second in Triple Jump, beat Kai in the hurdles to gain silver and a new PB.

Josh Conroy, competing for the first time in the Senior Men’s Shot Putt, gained a gold medal and a personal best. Josh impressed himself and his Coach, Gerry Heapy, by achieving his target distance.

Lewis King made a steady comeback after minor injury to complete a confident series in the Under 17 Men’s Long Jump.

Natalie le Beau, second in both Long Jump and High Jump looks to have a good season ahead of her outdoors and one of the last events of the day saw ‘birthday boy’ Emmanuel Stephens regain his Essex title in the 60m.