Romford and Gidea Park RFC was the venue for Gateway Academy history last week, where the Year 9 Rugby team secured their position as the best “emerging” U14 rugby team in Essex winning the cup 17-7 v Shenfield. 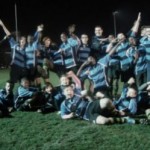 All 21 Boys from the squad have worked amazingly hard over a campaign that began back in September.

Coach Ryan Jones said: “It is not an exaggeration when I say, the boys have given freely over 40 hours throughout the season in snow, sleet and rain all dedicated to becoming the best that they can possibly be!

The game did not quite begin as planned, the kits clashed so Gateway had to change into their spare shirt

It is important to remember that in Yr 7 only two members of the squad had ever played rugby before, The Gateway Academy has been playing competitive Rugby for less than 4 years, many of their opponents are sports colleges, grammar schools and schools with a long history of competitive sport.

William Coley President of the Essex County Schools’ Rugby Union could not of been more complimentary about Gateway team last week, he intends to write a letter to headteacher Mr Sadler highlighting the conduct and skill level of their students.

They will also be presented by Mr Coley with a winners shield to engrave and keep for a year as well as a smaller shield that will always remain at the Academy.

Miss Matthews, Mr Hayes and Mr Starnes all kindly gave of their time to supply the team with photographs.