THE JOKE USED to be that former councillor, Earnshaw Palmer was the only Lib-Dem in the village. Last year at the General Election, parliamentary candidate was a breath of fresh air. It was a shame that the local party didn’t put any local candidates forward.

Things since then have gone a little bit stale for the Lib-Dems as many perceive their decision to go into coalition as some form of Faustian deal. They have robustly defended it as the first time they have had a chance to influence policy since the 1930’s. Others now believe that they will find themselves in the political wilderness for a generation.

This has not detered Luke Tyson. Luke has decided that this is the time to lay down some roots for the Thurrock Lib Dems. With an impressive fifteen candidates out of sixteen wards, they clearly intend to be around in Thurrock politics for a long time.

May 5th may not be too kind to them but Luke and the others are in it for the long haul.

Liberal Democrat activists also held a day of action in Chafford Hundred on Saturday, campaigning for a Yes result in the referendum on voting reform.

Campaigners were delivering leaflets to homes and canvassing opinion on the doorstep.

“The response on the doorstep was very positive. Our messages of making MPs work harder for you vote, and the end of wasted votes and MPs having a job for life is coming through.

“This is a small change that will make a big difference and will stop our politicians taking us for granted.”

YT spoke to Luke in Chafford Hundred about the hopes for the young Lib Dems. 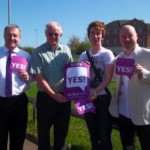