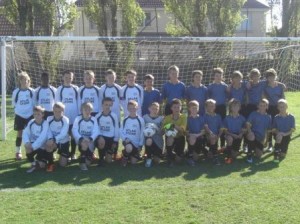 Thurrock were amongst 14 teams who took part in the festival which pitted them against the best district teams from across the country. The Thurrock team, who have been together since October, showcase the best footballers in Year 6 from Thurrock primary schools. The football festival in Jersey is the finale to a season of district football which has been mixed for Thurrock. They currently still have a chance of winning the Essex League and managed to reach the semi-final of the Gills’ shield before being beaten by Barking and Dagenham..

However, the highlight of their season was last week when they played a team from New Zealand on the island of Jersey. At this point in the festival, the team were unbeaten, having drawn against Plymouth and South Birmingham and won against the Jersey team. The match against the Kiwis was preceded by the players performing the traditional Haka. However, this didn’t effect Thurrock who romped home with a 7-0 victory. Kevin Watts, co-manager said, ‘Attending the Jersey festival is a highlight of the District football calendar which the players thoroughly enjoyed. Playing the team from New Zealand and playing so well with a fantastic result was a great experience for all involved. The team really wanted a game against the New Zealanders and this made the week even more memorable.’

John Bryant, co-manager stated, ‘The team represented Thurrock extremely well and were a credit to their schools and Thurrock.’ With three matches to play before the end of the season, Thurrock aim to end on a high and continue their recent good form.