Labour slam Tories over attempts to “woo the BNP vote”

FOR SOME, it is a no-brainer. Aveley is a key seat that the Tories want to win. Since 2007, the BNP have averaged just under 500 votes. But the BNP are not fielding a candidate this year. There is, as they say, a gap in the market.

Labour have accused the Conservatives of a “indefensible lurch to the extreme right’ as the latest leaflet for the Tory candidate, Maureen Pearce lays claim to the “patriotic” territory.

The campaign leaflet for the former Mayor gives a bullet point statement for what she believes in:

1. Flying the Union Jack and Cross of St George all year round.
2. Stopping mass immigration into Britain.
3. Putting ‘political correctness” into the dustbin of history.
4. Keeping our £pound and saying a big No to the European Union!
5. No votes for prisoners.

With a popular UKIP candidate in Tim Aker as well as Independent candidate, former Tory mayor, Colin Churchman the seat could be the difference between who holds power in the chamber come May 6th.

She said: “We want to see action on overstayers in the country. There needs to be action on key immigration issues such as this. I have made my feelings quite clear on no votes for prisoners as there was a vote in the House of Commons on this matter quite recently.

Jackie replied: “These are two different matters entirely. One was a question of being racially offensive. We are talking about matters such as the PM being lambasted for saying “Calm down dear”.

YT asked Chafford Conservative councillor, Tunde Ojetola what his thoughts were on the strategy. He said: “I haven’t seen the leaflet.”

YT interviewed the former mayor out on the streets of Aveley and asked her what she thought were the key issues for the people of Aveley?

The list of candidates can be found on the politics page of YT. 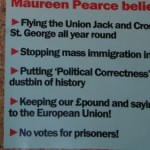