The small contingent of just 10 swimmers once again proved they are amongst East of England’s elite, placing 7th in the overall medal table recording 18 Long Course PBs, 25 final appearances and 10 medals in all (2 gold, 2 silver, 6 bronze). Thurrock also retained their position as top Essex based club within the East region.

Eighteen year old club captain Conor Harrold led the way with an impressive display of swimming in a number of events. Fresh from being crowned top 17/over Essex boy in the County Championships back in March, Conor was once again in fine form, taking the 400m IM regional title (4:48) and medals in
the 200m fly (2:13, silver) and 200m back (2:13, bronze). Conor also went on to claim 5th place in the 100m back in a national qualifying time of 1:01.47 and
6th spot in the final of the 50m back (29.04).

Seventeen year old Sophie Drake was also crowned Regional Champion after a faultless display of backstroke sprint swimming in the girls 100m event (1:06). Sprint queen Sophie, also impressed in the heats and final of the girls 50m free, claiming silver in the 17/over category (27.7).

Another medalist for the male contingent was 15 year old Sean Houlihan.Despite suffering a bout of illness just days before the championships, Sean still managed to bring home medals in his signature breastroke and individual medley events. Sean qualified comfortably for the final of the boys 15/16 200m IM, where he claimed an impressive bronze (2:18), finishing only behind older 16 year old swimmers. Sean went on to emulate this performance in the 200m breast, again finishing in the bronze medal position despite not quite being at his best (2:34). Sean also just missed out on the medals in the 100m breast, where he took 4th spot (1:12).

The final Thurrock medalist was 17 year old Kerriann Chipperfield. Kerriann had a busy schedule of events the highlight being a bronze medal-winning swim in the girls 800m free (9:25). Kerriann also finished 5th in the girls 200m fly (2:33) and 8th in the final of the 100m fly (1:08).

After a disappointing start to the season, Butterfly specialist Sonny Ford now looks to be returning to top form. A gusty swim in the heats of the 200m fly,
saw the 15 year old qualify 2nd fastest for the boys 15/16 years final, in a national qualifying time (2:15.7). In the later final, Ford was just touched out of
the medals, but delighted to be ranked as 1st 15 year old within the region. An equally impressive swim in the final of the boys 15/16 years 100m fly (1:01),
saw Sonny finish in 6th place overall, but 2nd in the boys 15 years rankings.

Team Thurrock were also represented in the boys and girls medley and freestyle relay events. The girl’s quartet of Sophie Drake, Kerriann Chipperfield, Rebecca Hayes and Georgia Mills dominated the 1st heat of the girls 4 x 100m freestyle relay and finished 7th overall. In the boys 15 to18 years medley relay, male quartet Conor Harrold, Sean Houlihan, Sonny Ford and Harry Payne were the surprise package in the field and only just missed out on bronze. The quartet recorded a time of 4:09, which may be enough to qualify for the event at the national youth championships in August this year. 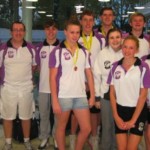