NEIL Ashurst and Owen Ward from Thurrock have been honoured by international adventurer Chief Scout Bear Grylls for gaining their Queen’s Scouts Awards.

Bear Grylls greeted nearly 300 new Queen’s Scouts at Windsor Castle on Sunday 1st May.  He was joined by The Hon. Mary Bayliss, Lord Lieutenant of the Royal County of Berkshire. The event comes at a boom time for Scouting following last month’s announcement of the movement’s continued membership.  Total numbers now exceed half a million.  Furthermore, more girls than boys became Scouts in the past year – the first time this has happened in the movement’s history.

The Queen’s Scout Award is the highest honour in Scouting and is awarded for outstanding personal achievement.  This honour is achieved by young people aged between 16 and 25 who have completed a range of challenges, which includes service to their community, completed an expedition in wild country, undertook a five-day residential project in an unfamiliar environment and learnt a new skill or developing an existing talent.

Owen Ward, aged 23, from Stanford-le-Hope said “Gaining my Queen’s Scout Award has been awesome.  One of the best things I have ever done in Scouting was having a real adventure completing my expedition. For my expedition I canoed across Scotland along the Great Glen from Fort William to Inverness.  It was extremely hard work at the time, but looking back at it one of the best things I’ve ever done.” 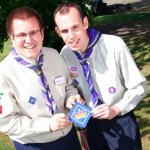 Neil Ashurst, aged 25, from Grays added “It feels pretty fantastic to have been awarded my Queens Scout Award.  Travelling for four days across the Lake District was the highlight of the award.  Like Owen said, I found it hard work, but looking back one of the highlights of my life.”

Chief Scout Bear Grylls said “All these young people have lived the adventure of a lifetime to achieve their Queen’s Scout Awards, and I admire that spirit so much.  They are huge inspirations to the other 500,000 scouts in the UK and I am so pleased that both Scouting has honoured them today. They are amazing.”

The Windsor Castle event has been held regularly since 1934 on the Sunday nearest to St. George’s Day (23rd April).  St. George is the Patron Saint of Scouting.  Since the Queen’s Scout Award was instigated, over 100,000 of these awards have been presented to young men and women for outstanding personal achievements and service to their local communities.  They have learnt new skills and taken part in many of the 200 different activities on offer by Scouting across the UK.