“Arriving at transition was incredible, millions of dollars worth of bikes spread over 550m of transition area , the entire street was closed for the bikes, it was going to be a long run at T1 and T2.

I wasn’t expecting a run start from the beach so hadn’t really practised that but it was actually pretty uneventful for me, I got in the middle of the pack and found some clear water pretty early, took a kick to the goggles just after taking the first buoy turn and from them my sighting went a bit off and I definitely swam off course,the sea water and porridge also didn’t mix too well on that final half and so I managed to perfect the unpracticed discipline of expelling porridge underwater without losing any strokes – something that Dave (my coach) hadn’t added to my swim training plan although executed to perfection. As such I had to pick up the pace on the second half of the swim but to be honest I felt great on the whole swim and in hindsight I could have probably gone harder, taking a split as soon as I got out of the water gave me a time of 30:23 although the official time showed 32:01 so the timing mat must have been further along into T1 as I recorded a 5:47 T1 but official time was 4:17 (I’m always disorientated after the swim though so not really sure what I’m doing). Still it put me at 91/281.

Getting on the bike I felt great until the start of the climb, took on gels every 30 minutes and then proceeded as usual to watch all the strong cyclists but slow swimmers, overtake me on the climb. I really enjoyed the bike and chatted to a few people on the climb up to make the most of the day, the scenery was stunning and bombing down the downhills crossing over the center line due to the closed roads was fantastic, even though some of the switch backs were seriously scary. I was gunning for sub 3 hours on the bike but just didn’t have it in me, managed 3:08 in the end which was still 34 minutes better than my Wimbleball effort last year but it’s still my weakest discipline (223 / 281). 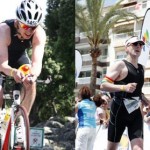 Lots of practise at running off the bike over the last few weeks I actually felt great getting off the bike and into T2 and with a split here of 2:34 I actually ended up 4th fastest in my age group – so as my wife Lucy said so you’re actually “Just really fast at changing your shoes” ! I beg to differ, it’s a highly honed skill I’ve developed there (!) .

The run was hot, I’d planned my training at UK midday runs over the past few weeks to get used to the heat but this was seriously hot. Fortunately the slickness of the whole IM organisation team meant that with water and ice sponges strategically scattered along the route it was almost impossible to get overheated. Around 1/2 way round the first lap I felt my legs starting to cramp, I’d had this last year at Wimbleball and so I knew straight away I needed to get hydrated so I grabbed as much water as I could at the first aid station and then fortunately I ran through the cramping and it never came back, I just made sure I took on liquids at every stop. My first lap was a fast 26:21which felt great but they gradually slipped. I ended up with a 1:59 run split – same as at Wimbleball. (162/ 281)

One thing I wasn’t expecting to have was the wet feet from the sponges, the whole run my feet were sodden and this definitely made my feet feel heavier. Still considering the heat and walking through pretty much every aid station to get hydrated 1:59 wasn’t too bad and hopefully at the New Forest in September I’ll be able to get a better bike split and get closer to my target of 5:30.

Overall 174/ 281 and finish of 5:47:35. Good to know the nutrition strategy worked though, I took on around 8 gels for the race and didn’t have any GI issues even though I saw lots of other people with issues along the run. Great event, good support, stunning bike course and a well supported run and slick organisation puts this at the top of my races so far.”