Detectives have released a CCTV still of a man who may have crucial information relating to a case of grievous bodily harm that took place at Meads Corner, Arterial Road, Purfleet around 4am on Sunday, March 6, 2011.

A 25-year-old Grays man received stab wounds and 33-year-old Robert Wylie, of Dock Road, Tilbury has been charged with gbh and remanded in custody to appear before the Crown Court on August 12, 2011. 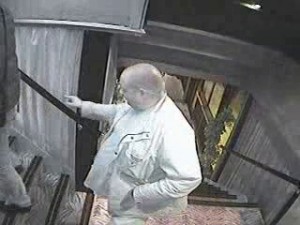 The man captured on CCTV is known to have been in the Circus Tavern, Purfleet before the incident, which took place outside. Dc Peter Harvey, from the Serious Crime Team based at South Ockendon, said, “I believe that the man shown in the CCTV still may have vital evidence and I would ask him, or anyone who can identify him, to contact me.” The man in the picture, or anyone who can identify him, is asked to contact the Serious Crime Team at South Ockendon on 0300 333 4444 or they can call Crimestoppers on 0800 555 111.