Sea Cadets take to the high seas at Lakeside

FAMILIES looking for a fun-filled weekend made their way to Lakeside Shopping Centre to see Sea Cadets from across the south at the SeaCadetFest.

Over the course of the weekend, adventurous Sea Cadets took to Alexandra Lake to demonstrate their canoeing, sailing, rowing and power-boating skills. A 20-strong Sea Cadet band played outside the centre and, in the Central Atrium, there was naval dancing with performances of the Hornpipe, as well as military-style marching. There was also a 12-hour sponsored dive in a purpose-built tank which raised funds for the maritime youth charity. 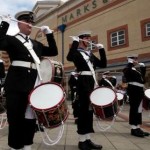 Thurrock’s Deputy Mayor, Councillor Yash Gupta, says: “I was thrilled to be at Lakeside for the SeaCadetFest this year. All of the families were clearly having a great time, making the most of the free activities and meeting the Sea Cadets. A fantastic family event!”

Kylie Minor, Lakeside’s Acting Marketing Manager, says: “The SeaCadetFest weekend proved to be really popular once again. It was a fantastic opportunity for parents and children to enjoy a great day out and try something new.”