MP sets the record straight over relationship with lorry park

THE portacabin at Titan Works in Hogg Lane, Grays was only used as a “storage facility and mailing address” and not as a campaign HQ by Thurrock MP Jackie Doyle Price in the 2010 General Election and she was also not aware that the ICG location had any facility as a lorry park.

The MP’s comments came after a three day public inquiry into an enforcement notice in respect of ICG’s premises in Oliver Road, West Thurrock as well as a request by under-fire councillor Joy Redsell for an inquiry into her own actions, both in respect of the lorry park and her meeting with a property developer. 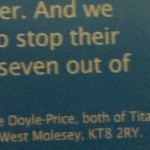 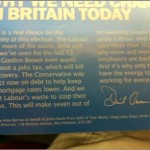 at the bottom: “Promoted by Anne Barrow on behalf of Jackie Doyle Price, both of Titan Works, Hogg Lane, Grays, Essex.”

However, the Thurrock MP has explained to YT what the arrangements were.

“As the Conservative Club had made alternative use of the office that Thurrock Conservatives had previously occupied, ICG allowed the association use of a Portakabin on the Hogg Lane site.

“For my part, I used this as a mailing address and storage facility only, for the simple reason that with no ability to host a phoneline or internet access, it could not be used as any kind of office. My campaign was run from 4 The Broadway, Pitsea.”

The core of her campaign team, Anne Barrow, Charlie Key and Eddie Hardiman are all, apparently, no longer active in the Conservative Party but the former deputy mayor, Eddie Hardiman was campaign manager and explained what the portacabin was used for.

He said: “We had a reisograph (printing machine) that went from our former HQ at St Clere’s golf club to my house in Stanford-le-Hope and then to Titan Works in Hogg Lane.

“Jackie only visited the Hogg Lane site a couple of times and I could see that she wasn’t impressed. There were no telephone lines, no internet connection. Even the mobile dongle broke off! So we just stored stuff there.

“Eventually we went over to the South Basildon and East Thurrock (SBET) base in Pitsea.”

YT interviewed the then prospective candidate SBET candidate (and now MP) Stephen Metcalfe during the campaign. We put it to Mr Hardiman that during our visit, the office was a blur of activity and had a plethora of campaign paraphenalia but none seemed to relate to the Doyle-Price campaign.

He said: “No. None of the material was kept there as we didn’t want to conflict with the Metcalfe campaign.”

As for the question of the portakabin being in the same location as an unauthorised lorry park, Ms Doyle Price confirmed that she was not aware of any lorry park at the premises.

A photographer went to the Hogg Lane site on Friday and snapped 27 lorries parked at the site. 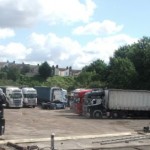