AN OUTSTANDING retail worker from Tilbury has been shortlisted for a prize at the retail industry’s annual awards ceremony, despite being unemployed just six months ago.

Karolina Sulinska, 21, a sales advisor at Superdrug in Lakeside has been shortlisted in the National Skills Academy Retail Learner of the Year category at the SkillSmart Retail Rising Stars Awards, an annual event that recognises up and coming talent in the industry. 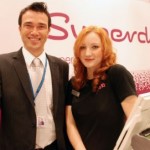 It’s a huge contrast to just over half a year ago when Karolina was searching for work after being unemployed for four months. It was the JobCentre who directed Karolina to the Prince’s Trust Get into Retail course run by South Essex College at the Lakeside Training Centre and she hasn’t looked back since.

Karolina explained: “I went along to the taster day and really enjoyed it. Previously I’d worked in an office and did an NVQ in Accounting but it wasn’t for me. The Get into Retail course was great; I learnt so much and received a huge amount of support. I’ve discovered I’m much more suited to retail – I love it!”

The month-long course involved a two-week Retail Works qualification at the Lakeside Training Centre learning about customer service and communication skills and two weeks putting it into practice in an unpaid placement at Superdrug.

On completion of her placement in the make-up and cosmetics store, staff were so impressed with Karolina that they decided to take her on permanently. She explained: “Superdrug didn’t have a vacancy but after I finished my two weeks with them they went out of their way to keep me on. Superdrug has now put me on a Health & Beauty NVQ which is amazing considering I’ve only been there a short space of time.”

Her hard-work and enthusiasm was not only recognised by her employers at Superdrug but also by South Essex College staff at the Lakeside Training Centre who put Karolina forward for the award. Karolina will now be competing against just two other people in for the title of Retail Learner of the Year in a glamorous black-tie ceremony at the Grosvenor Hotel in London on Thursday 8th September.

Steve Bond, Internal Verifier Co-ordinator for Business & Management and Retail at South Essex College said: “When Karolina joined us she was initially quite low on confidence and self-esteem but she thoroughly enjoyed her training and has a clear passion for retail. She has been on a real journey and her achievement is even more impressive considering how far she has come both personally and professionally in such a short space of time. It’s a perfect example of the doors that can open through upskilling and improving your qualifications.”

Not resting on her laurels, ambitious Karolina is now planning to study for a degree in Retail Management at the University of East London next September, whilst continuing to work part-time at Superdrug. Karolina concluded: “It’s unbelievable that all this has happened because I took a chance on a four-week course, it’s completely changed my life. Even if I don’t win the award on Thursday, I’m just so pleased to have been nominated.”

For more information on the Prince’s Trust Get into Retail Course contact Janet Craven on 07768905602 or email janet.craven@princes-trust.org.uk.