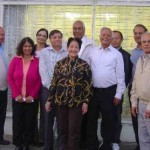 THE ANNUAL GENERAL MEETING OF THURROCK ASIAN ASSOCIATION was held on Sunday 18th September 2011 at the T.A.A. Resource Centre, 35 Clarence Road, Grays which was well attended. The secretary Mr. Mitra read out the minutes of the last AGM which were approved. The honorary treasurer Captain Pawar presented the accounts for the year and answered questions raised by the members. The accounts were approved by the AGM.

Yash Gupta president of the Association presented his report and highlighted the following achievements of the Association and thanked everyone for their help and support including the Thurrock Council, S.W.Essex PCT, TRUST and the local Press.

1. There has been a steady increase in our membership, which now stands at 272 local families, increasing the target of 250 set by us last year.

2. We celebrated two prominent Asian Festivals; Baisakhi and Diwali which were well supported by all local communities. We also celebrated the ROYAL WEDDING which was a multicultural event.

4. We started HEALTHY LIVING PROGRAMME FOR OLDER PEOPLE with the help of S.W.Essex PCT which is benefiting the health and well-being of a number of older residents living in Thurrock.

5. Our Bolly wood dancing class is progressing well. They performed at three local community events including the DIWALI FESTIVAL.

6. Thurrock Asian Resource Centre has been very well used by individuals and various groups. This year 6437 visits were recorded into the Centre compared with last year’s figures of 5414, over a thousand more than last year.

7. Regular sessions are held for Women and Older people to help and support them

8. Adult Music Class takes place every second Wednesday from 11 to 1 pm which provides fun and learning to older Thurrock residents. Free Yoga lessons are held on Saturdays from 12 to 1 pm.

9. Officers and committee members elected for next year were;

The meeting finished with the Indian Refreshments and vote of thanks for everyone who attended.