Grays residents rally against fourteen-strong “Family from Hell” moving in. 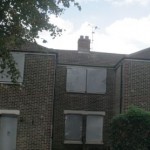 HUNDREDS of Grays residents are up in arms over the councils plan to move a family of fourteen with a history of anti-social behaviour into the heart of their community.

The Price family presently live in Lodge Lane, Grays but it is reported that their four-bedroom semi-detached council house is now too small for them.

Knowing that this day would come, it is reported that Thurrock Council officers have spent the last four years trying to find two properties that they could merge together. Recently, they had identified two unoccupied and boarded up- properties in Wallace Road, Grays.

Residents were informed of the proposals and immediately called for a meeting with their local councillors and council officers.

Last week over a hundred residents held a meeting at the hall in Dexter Close which was chaired by councillor Yash Gupta accompanied by a number of council officers.

At the heated meeting, residents expressed their grave concerns at the suitability of the location.

Speaking to YT, one resident (who wished to remain anonymous) said: “Where they are at the moment is ideal. They are far too close to other residents here.

Wallace Road is a narrow street with residents close together. It will be a guaranteed hotspot for trouble.

Cllr Gupta said: “It was a very heated meeting. People are concerned and have organised a petition. The council officer took on board what they were saying and has gone back to council offices to consider the next step.

“From what I can gather, the family are happy where they are but the council has to consider their welfare.”

Over three hundred residents have signed the petition, which is set to be presented to the council next month.

A spokesperson for Thurrock Council said: “The council cannot comment on individuals without their permission – all allocations are done in accordance with the authority’s Letting Policy as this is a legal requirement.

Earlier this year, the Price’s Lodge Lane neighbours complained that their life had been made a living hell by their anti-social behaviour.

YT approached Adam and Esther Price but they declined to comment.

2 Responses to "Grays residents rally against fourteen-strong “Family from Hell” moving in."