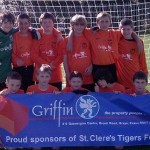 Today playing away to Intersports we started the game well with plenty of good passing and movement, this in turn paid off as we broke though for Joe (one of our new signings) to finish a great move with our first goal midway though the first half.

We continued to pressure Intersports and this paid off just before half time with John scoring our second goal making it 2-0 at half time.

Going into the second half, we started much the same with chances coming but we could not score. With 20 minutes to go we got caught out of position which allowed Intersports to pull a goal back making it 2-1.

We then found the last ten minutes nervous as players were rushing to clear the ball. The game ended 2-1 in our favour but as a team we need to be switched on for the whole game a good result in the end.

Well done team but as I said we need to focus for the whole match and continue the way we play no matter what the score is.