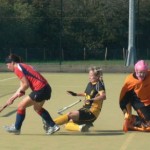 Tees went into the second game of the season on a high after beating East London at home 1-0. This weeks game was played in 29 degree heat and with some pace, with both teams defending off the counter attacks. However it was Brentwood that drew first blood by slotting it past Man of the Match Andy Gaut in goal and that’s how it ended at halftime.

The second half saw Tees come out fighting but where thwarted by a resolute home defence. Thurrock where caught out again with two well worked short corners followed by a fierce strike from the top and a close up deflection. They never gave up and where rewarded with a goal two minutes from time.

The Firsts play Crostyx II this Saturday at Palmers, 11 am start

Chelmer Park isn’t a venue where you expect to pick up easy points, and with three 13 year olds making their Second team debut, the Twos would have taken a point before the match begun.

Tees had easily the better start though, and should have taken the lead at least once but failed to put enough pressure on the Chelmsford keeper from a series of penalty corners.

Chelmsford broke the deadlock on 25 minutes with a passage which another umpire would have penalised on another day, with a ball lifted close to defender Rick Clubb’s body, play was allowed to go on, and a simple lift over the advancing keeper allowed the home forward to volley home.

With the game being played in the sweltering late summer heat, both sides were grateful for an extended half time break to allow the freshly watered pitch to dry out adequately, however when play was restarted the ball wasn’t rolling as well as it should, and a through ball from Matt Leaver was held up in a puddle before it reached forward Darren Higgins in a dangerous position in front of goal. Undeterred, the Twos pressurised their hosts into a series of defensive mistakes, and surely with a full strength XI would have scored sooner than they did. The goal came when a goalbound shot was deflected wide by a defender’s foot. Leaver stepped up to take the resulting flick, which he calmly slid under the keeper’s diving body.

The Twos were rightly pleased with their first point of the season, with special praise going to future stars Tom Archer, Byron Wood, Freddie Taylor and George Horgan who never looked out of place playing in NE14 Hockey Division 5SE.

Thurrock entertain Colchester at Palmer’s next week, pushing back at 12.30pm.

Thurrock began the game strongly and after five minutes went into the lead when Liam Birch collected the ball on the edge of the 25m line and dribbled through the Colchester defence before slipping it past the advancing keeper. Ten minutes later, Jimmy Venus made it 2-0 when he collected a pass from Himesh Patel and fired into the net from the edge of the area. Colchester drove forward from the restart and put together a series of passes which took them into the Thurrock area however right back Sam Webb was alert and dispossessed the centre forward before he could shoot. Colchester were becoming more threatening and keeper Danny Hick was called upon to make a series of saves to thwart the attack.

Five minutes before half time Matthew Skinner made a run on the right before centring for Michael Fleming to round the keeper and make it 3-0. Thurrock continued to play the better hockey in the second half but a strong Colchester defence held them back until, after 60 minutes, Matthew Fleming, playing his first game for two years, seized on a rebounded shot off the keeper and flicked the ball into the net.

The Ladies First team were able to filed a strong team and were lucky to have a squad of 12 which was very helpful in the heat! They are proving to be exceptionally strong force in this league and yet again came away with another resounding win of 5-0! In the last three games the Ladies have scored 21 goals. The defence remained almost onlookers whilst Ally Bonner (2), Miriam Nicholls (2) and Katie Jacks all got onto the score sheet. All players performed well with Lou Pike having a noteworthy performance.

This Saturday Ladies I away to Blackheath I

REDBRIDGE & ILFORD 5 – 0 THURROCK II
The Ladies Second team were not so fortuitous and were in the position of fielding an exceptionally young and inexperienced team. Captain Charlene Curtis has fought valiantly throughout the week to field a team and despite her inspirational leadership the team lost 5-0. Faye Tuffee was outstanding for the ladies and a true inspiration to her younger teammates.

On Saturday Ladies II are away to Essex University