Thurrock Ladies I had a good result beating Sevenoaks IV by two goals to nil. The first goal was scored by Tessa Ing from a short corner and the second was via an excellent pass from Louise Pike to Alison Bonner who shot at the top of the D straight into the goal! Keeper Lauren Marshall had made her debut in goal for the Firsts and with the solid defence of Parrott, Ellis and White, kept the Sevenoaks team at bay. The midfield took control and stopped the opposition from attacking and breaking down their play with Natalie Beardwell playing really well on the left.

This Saturday the Firsts are away to Gillingham Anchorians I 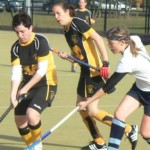 After the Ladies 2s battle for a draw last week, they hoped this week would be a game that would end in a win. Playing a Wapping team that were currently below them without a win brought added hope of gaining three points.

Thurrock had a strong team that had a lot of experience under their belts which could only lead to one result.

The first half saw the defenders Katie Lawrence, Debra Blamey and Fay Tuffee hard at work to help keep the Wapping forwards away from goal and their stand in keeper Liz Gray. The hard work continued through the Thurrock team with some quick passing between Sally Willett, Jo Diss and Karen Lucking up the right to create some chances for forwards Nicole Brown and Leah Purser to hit some shots.

Wapping were attacking strong down their right side of the pitch but some fantastic tackles from Charlotte Adnams and Charni Horseman stopped them in their tracks and kept the pressure on Wapping defence.

Once Thurrock got in their stride, the goals just kept coming. Thurrock’s Leah Purser and Sally Willett both got a hat trick, with Nicole Brown finishing the onslaught with a well deserved goal who was also the player of the match.