THE SOUTH East England round of the national clubs for young people (CYP) Boxing Championships took place recently in Harlow hosted by Essex Boys and Girls Clubs. 16, 17 and 18 year olds from Essex, Suffolk, Sussex, Surrey and Kent boxed for a place in the National Quarter Finals.

Out of the 12 Essex boxers that competed on Sunday six progressed with wins into the next round and one step closer to the National Boys Club Boxing Championships. Michael Maloney (Chadwell St Mary ABC) won the Junior ABA title earlier in the year and has recently been shortlisted for the Sport Essex Young Sports Personality of the year award. Michael got the show under way by picking his shots and landing heavy blows to win the bout with an 18-4 points victory over Connor McKinnon (Woking). 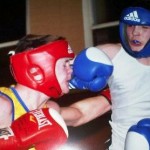 Kieran Redding also progressed into the next round by beating Luke Law of Rosehill 20-9 on points with a strong jab before putting his opponent to the canvas. Kieran meets the talented Charlie Driscoll of West Ham in the next round. Unfortunately Kevin Reavell could not make it three out of three for Chadwell St Mary who came up against a really strong experienced boxer named Hayden Bulloch of Crawley but his coaches were really pleased with his performance and he proved he was worthy of a spot in the championships and this will just strengthen his chances for the future championships.