It had been 20 years to the week that Thurrock defeated London Irish in one of the biggest shocks in cup rugby, the reunion held on Saturday was backed from not only players from that day, but many former players, and the class of 2011 certainly gave them a game full of entertainment and tries.

The game was barely 30 seconds old when the forwards secured ball direct from the kick off and Josh Cook made a high box kick over the defence and Bradleigh Rettigan showed great pace to collect the bouncing ball and sprint over the try line, Mike Stanley missed the conversion. It was one-way traffic for the whole game with the home side keeping the pressure on the visitors it looked likely to be a long afternoon for the visitors. The forwards got into the act from an attacking line-out the ball was well secured and the resultant drive allowed Christian Rate to score wide out, Stanley added the conversion.

Thurrock kept up the forays into the visitors half, but Colfe’s responded well trying to counter attack and forced Thurrock to concede two kickable penalties, which only one by Ed Livett was successful, that was the only attacking threat that Thurrock endured all afternoon. Nat Farrell was next on the score sheet with another mazy run, followed again by a great line of attack by Darryl Worster to score under the post’s, Stanley kicked both conversions for 26-3 half time lead. 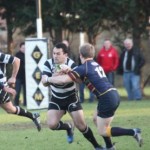 The second half was much more of the first with some great attacking rugby from the home side, from a quick tap penalty for an infringement in the scrum it was man of the match Rettigan that took it and went over to score, Stanley added the extras. Then it was fly half Ian Rudgeley who made an exquisite chip for Mike Stanley to catch to go over between the posts, Stanley again was on hand to convert. Stanley was harshly yellow carded for not releasing the tackled player, but even down to 14 men it made very little difference as Thurrock scored through forward Nick Cooper-Hicks crashed over close to the posts, and Worster added the conversion. After the sin bin Thurrock made three changes with Keefe, Loka and Gorman entering the fray, it made little difference has the home side still had time to score two more tries, a rather fortunate try from Ben Stanley whose knock on was missed by the referee, who strolled over and the crowd was stunned that the try was given, then a cross field kick from Stanley found Sam Boshell in acres of space and he fielded the ball well and ran in to score and Mike Stanley added both conversions. 9 tries 8 conversion was not a bad afternoon’s work for the league leaders.

THIS WEEK THURROCK TRAVEL TO ETON MANOR, KICK OFF TO BE CONFIRMED