SWIM star Sonny Ford recently won four Essex County swimming titles at both junior and senior level. The fifteen year old William Edwards student became only the 2nd swimmer in the last 20 years to win both the 100m and 200m butterfly titles in the 16 and under and men’s opens category. 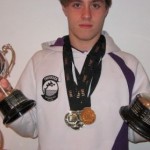 Victory in the final of the 100m fly was never in doubt as Ford led from start to finish (1:01.72). The 200m fly was more closely contested with Sonny just outpacing teammate Conor Harold in the final 15 metres, to take the junior and senior titles. Harrold himself returned home with 3 silvers in the open age group; the 200m back, 200m fly and 100m back. Conor was agonisingly close to winning the 100m backstroke final but had to endure the agony of being touched out at the finish by a mere 0.01 seconds. Although disappointed, there was some consolation for Conor as his time of 1:01.01 was his and Thurrock’s first national qualifying time of the 2011/2012 season.

Despite not being in top form, 16-year-old Sean Houlihan recorded silver medal swims in the 16 and under age category in the 200m IM, 200m back, and 200m breast and also took the 200m IM bronze in the open age group. Freestyle specialist Harry Payne recorded a hat trick of podium finishes in the open age group. Payne took the silver in the 1500m and 400m free and delivered a blistering sprint finish in the final of the men’s 100m freestyle to take 3rd spot (55.77)

Thurrock’s only female medalist was 15-year-old Rebecca Hayes, whose impressive 200m backstroke swim (2:34.04) was enough to win the bronze in both the 16 and under and open age group categories