LAST Friday (9 December) was a Brandon Grove man’s lucky day — the day when a lifelong dream came true; when his wife had organised that “something special” for his 40th birthday!

The council had been contacted by Vikki Luck of Brandon Groves in South Ockendon, with a strange request.

She asked whether it would be possible for her husband John to drive one of the council’s road-sweeping vans as a part of his 40th birthday celebrations.

She said that, since he was a little boy, her husband has been fascinated by road sweeping trucks — not in the “anorak” sense of collecting their numbers, but he just loved the way they worked. Secretly, he had always wanted to try to drive one. 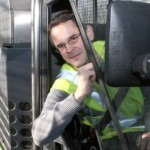 On Friday, Gary Prayel, driver charge-hand at the council’s Curzon Drive depot, took Mr Luck through a full induction and health-and-safety briefing so he could drive the Green Machine, and then he was charged with the job of sweeping the yard at Curzon Drive.

Mr Luck admitted the “present” came as a complete surprise, adding: “I had no idea this was going to happen, I’ve had a great time and want to thank my wife and everyone involved in making my boyhood dream come true.”

Mrs Luck made a donation to Little Havens Hospice — one of the Mayor of Thurrock’s charities this year — to say thank you to the council for organising the experience.