THE RISK of BP petrol stations across the UK running dry looms large the European Commission will be told today (Tuesday 17 January) in a crisis meeting at the European Parliament over the continuing threat to Europe’s largest independent refiner, Petroplus, responsible for nearly 1,000 jobs at their Coryton, Thurrock refinery.

The urgent meeting has been called by Essex Euro MP Richard Howitt MEP who has set up a network of fellow MEPs from Germany, France and Belgium also responsible for areas where the company’s refineries are sited, to call on the European Commissioner for Employment to seek high-level EU intervention to avoid serious job losses and keep petrol pumps flowing.

The meeting takes place as urgent negotiations are reported between Swiss-parent company Petroplus with BP, who are reported to fear that supplies will be interrupted to garage forecourts across London and the South-East.

Richard Howitt MEP, who is working alongside British and European trade unions, led a delegation representing the four MEPs calling on the European Commission to consider assisting with the company’s restructuring and to use its competition and trade powers as part of any rescue package. 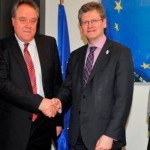 “Having visited the Coryton refinery and met with workers and management for myself, my message to the European Commission is that this is a profitable and efficient refinery with a capacity of 220,000 barrels a day , already working at less than two-thirds capacity.

“Currently the petrol is on half-empty and my goal is to ensure it never runs dry.”