Rugby: Thurrock win but not by a Diss-tance

This was always going to be a tricky fixture for Thurrock, despite putting 50 points on the hosts at Oakfield at the start of October their form since then has been good and were now lying 4th in the league. The home crowd were very vociferous cheering on their hero’s and the home side responded accordingly. Their effort and tenacity was much to the fore and tackled as their life’s depended on it, as the bigger Diss pack kept the ball close and made it difficult for Thurrock to get their hands on the ball. Diss however had no cutting edge and the Thurrock try line never looked threatened, Aston Bevans-Royston was yellow carded for pulling down a rolling maul, but fortunate for Thurrock the kick was wide. They did take the lead in the 25th minute when Beaird landed a penalty from 22 metres. With a strong wind at their backs Diss never utilised this in their favour and the half ground to halt with just the solitary score on the board.

Injury to Brad Rettigan meant a change at the break with Charlie Russo coming on in the back row, then further change see Seb Rate come on in the front row and Bevans-Royston going to lock. Thurrock kept Diss pinned in their own half for long periods of time but just couldn’t make the required breakthrough. Stefan North then went into the referees bad books has he was given a yellow card for dangerous play in the line out. Thurrock survived another 10 minutes with 14 men again conceding no points, in fact Frankie Neale went close with a penalty which just shaded the post. 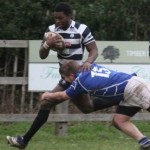 With 15 minutes Thurrock played their last roll of the dice, with Earl Gorman coming on in the centre replacing Ben Stanley. But still the visitors could not find a way through, and it looked ominous that it not going to be Thurrock’s day. With time running out Michael Stanley made an incisive break getting stopped short of the line the forwards managed to recycle the ball but Frankie Neale ran out of space near the corner but had the nous to keep the ball in play throwing it back into the field of play and the on rushing Bevans-Royston picked the ball off his toes at full steam and made up for his earlier misdemeanour and crashed over to score wide out. At last the Thurrock fans had something to cheer about albeit in the 74th minute

Diss obviously wanted to get back in the game but Thurrock used the wind to push the home side back, then Thurrock managed to turn the ball over from another Diss forward surge and quick ball gave Gorman the chance to make a great break and a perfectly timed pass to winger Sam Boshell sent the players and fans wild with delight

as Thurrock scored their second try confirming victory at the death. The home fans gave their side a fantastic reception on the final whistle, and the visiting supporters were just as ecstatic in seeing their team secure a hard earned win.

This week Thurrock entertain NORTH WALSHAM KICK OFF AT OAKFIELD is at 3.00 pm