William Edwards were winning this closely fought match between the boroughs strongest teams by 2 goals to 1 until the final 5 minutes. Kieran Desmond, who previously scored an earlier equaliser, headed home from close range despite a goalmouth scramble from the William Edwards defenders.

As the match looked as though it may go to extra-time, Gable Hall were awarded a free-kick on the edge of the William Edwards penalty box. Up-stepped Joe Clifforth, who expertly curled the ball into the top corner of the goal to send the supporters and players of Gable Hall School into delirium.

This victory adds to the successful league campaign for Gable Hall as they were unbeaten throughout the season and ended up winning the league.

Teacher Martin Leslie said ‘All those 7.45am training sessions in the wet and cold have paid off now. The boys are an absolute credit to the school and each other. I am very proud of their achievements’. 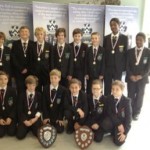