Down on the farm with Ockendon Academy 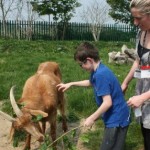 FOR FIVE WEEKS, students from the Beacon Hill School – a specialist school for children with sensory and physical needs, have been taking part in a ‘Fabulous Farmers’ course at The Ockendon Academy, led by tutors from Writtle College.

The children, who visit The Ockendon Academy every Wednesday, learn the basics in animal husbandry such as ‘mucking out’ the rabbits and guinea pigs, feeding the goats and even trimming a rabbit’s claws. They have also made use of the Academy’s poly-tunnel by planting seedlings and watching them grow each week.

Tutors from Writtle College, led by Esther Blakey – 14 – 19 Education Officer, describe the weekly sessions as ‘hectic’ but ‘good fun’. Esther, alongside her colleague Jim Mann – Further Education Lecturer in Animal Care, have already seen a big difference in the personal development of the children. So far the course has been running for just one term; however it has proved so successful that Esther and Jim hope to run a full course next year where the students can work towards gaining an entry level qualification.

Mrs Barbara King, Principal of The Ockendon Academy states: “I am thrilled that the students from Beacon Hill School have learnt so much from visiting The Ockendon Academy. We are excited to be working with staff from the prestigious Writtle College and we hope to develop this relationship further to offer more courses for students in the future.”

Angela Bull, Head of the Upper School at Beacon Hill School states: “It is great to see the students work with the animals and to also have the opportunity to become involved in the wider community at The Ockendon Academy and Writtle college. It is a very hands-on afternoon and the students look forward to it each week.