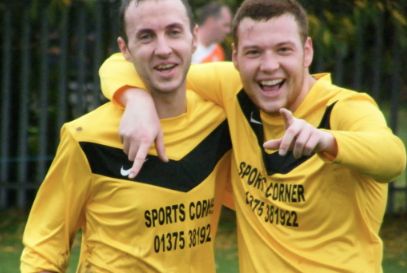 THE preliminary round of the Ted Fairchild All League Cup saw Deportivo Thurrock take on Busolona at the Springhouse, Corringham on Sunday, with a prestigious 1st round tie against Essex Cup champions United Ockendon on the cards for the victor.

A new look Deportivo line up took to the field full of confidence with some of the squads fringe players looking to put in a strong performance to add to the manager Chris ‘Frank’ Gilbody’s selection problems.

Both sides were quick out of the blocks and were looking to test the goalkeepers early on, with neither side really finding much to make the game their own. Busolona had the majority of the aerial battles, but Deportivo were finding more luck on the ground as the looked to work through the Busolona defence. This soon paid off for Deportivo as a quick interchange of passes released Jordan Owen down the right wing and a drilled pass across the box was expertly put away by Michael Sear as he darted in towards the back post, giving Deportivo the 1-0 lead as they went into the break.

With the game back in the balance, Deportivo started afresh after a quick substitution dropped Jack Moore into midfield and Stephen Brookes came on to set up a more conventional 4-4-2. The aerial superiority of Moore and the fresh legs of Brooks upfront really took the game to Busolona, with the chance coming thick and fast. Michael Sear found the back of the net after a deflected shot fell to him just outside the six yard box.

The game was now beginning to switch towards Deportivo’s favour, with Brooks and Carr making a nuisance of themselves around the Busolona box. A mis-timed challenge gave Moore the opportunity from a set piece. With the ball a perfect 25 yards from goal, a five man wall could do little to stop an expertly low curled free kick from Moore finding the back of the net. Depor were now 3-1 up and looking forward to the next round of the cup!

Busolona on the other hand were still up for the fight, with some extended pressure in the Deportivo box found them gifted with what looked to be another own goal. Another bout of confusion and miscommunication saw the ball deflect into the Deportivo net, and the gap shortening to 3-2. With the game starting to get a little tighter, another change was made with Craig Jarvis coming on to take an unconventional forward role and David Carr making way after another strong performance.

The influence of Jarvis was quickly felt as the usual centre back combined his strength (and a little luck) to worry the Busolona defence and give room for Sear to attack down the left, and when a speculative cross found its way into the back of the net via the knee of Jarvis, the tie was wrapped up nicely with a deserved 4-2 win for Deportivo.

It’s back to the league next week with an away fixture against Ventura with the side looking to continue with their strong start to the season.