By Staff Reporter on December 9, 20123 Comments 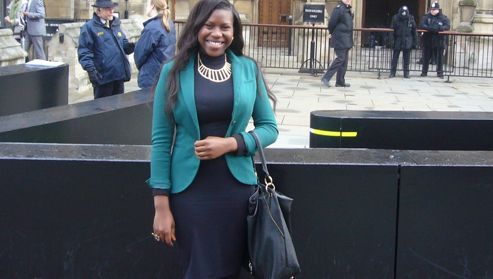 Anne-Marie Ola – Thurrock’s Youth MP – was one of over 300 young people debating issues in Parliament on Friday, 23 November.

Five national youth debates took place, each chaired by the Speaker of the House of Commons, John Bercow and the subjects had been voted for by over 250,000 young people across the UK as part of the Make Your Mark campaign.

The top issues debated were cheaper public transport; getting ready for work; marriage for all; an equal national minimum wage; and a curriculum to prepare us for life.

Each debate was introduced with speeches for and against the issue from young people, before opening up to the floor.

Of the five topics “a curriculum to prepare us for life” was chosen as the issue which will now form the UK Youth Parliament’s campaign for 2013. The issue received 154 of the 294 votes cast by the Members of Youth Parliament.

Anne-Marie, a 17-year-old from Chafford Hundred was chosen to speak during the minimum wage debate. And said afterwards: “As I sat on the green benches in the House of Commons and looked around at the MYPs, MPs and the Speaker of the House, I felt an overwhelming joy as I knew I was participating in a history-making event.

“Being able to represent the youth of Thurrock at such an inspirational sitting and being chosen to speak was a phenomenal moment that will forever remain in my heart.”

“I am hugely proud of Anne-Marie for representing the young people of Thurrock in Parliament. Thurrock’s youth movement have a great future ahead and Anne-Marie can inspire a generation across Thurrock to get involved in local and national politics.