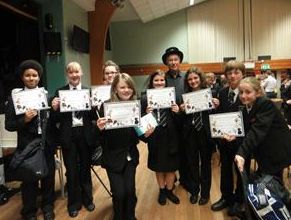 Hall have just taken part in the KidsLitQuiz which is an annual quiz held in the Corringham Village Hall, organised through Grays Library and Rosalyn Jones, who is East of England Co-Ordinator. This quiz is for students in years 7 and 8 from schools within the area.

35 teams were present all representing their schools, some with two teams of four others with one. Our school took 8 pupils, split into two teams Caitlyn Smith, Jake Hillion, Fleur Feeney and Sophie Bourne in one team and Phoebe Rawlings, Kerenza Wenn, Oliver Robertson and Laurelle Michaels in the other team.

There were ten categories of questions which included Shakespeare, Mythical Creatures, Wings, Who am I? and Snakes. Prizes of books, money and books tokens for the Adults, were given out during the course of the Quiz for correctly answered questions.

We competed against schools such as Maidstone Grammar School for Boys and Junior Kings as well as more local schools such as The Gateway Academy, Harris Academy and Grays Convent.

We had loads of fun and the Quizmaster, who was from New Zealand, was brilliant too.