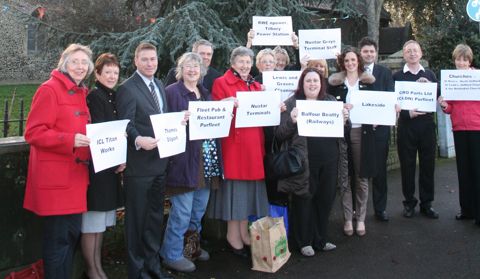 people, companies and council staff – have shown the Christmas spirit in the best possible way.

For many years staff at the Petroplus refinery in Coryton donated hundreds of presents for Thurrock Council to distribute among children receiving its services, but this is no longer possible.

Thurrock Council staff worked with Allison Campbell, community member of Thurrock Safeguarding Children Board, and contacted various companies around the borough asking for their help – and many local individuals also contributed to the fund, in order to give a gift at Christmas time.

Leader of the Council, Cllr John Kent, said: “The generosity of so many organisations and individuals in Thurrock is remarkable, sometimes I am stunned by how Thurrock as a community responds to a plea like this.

“It was made clear at the start that there was no guarantee of publicity – this was done out of the goodness of their hearts and some of those donating have still asked to remain anonymous.

“But those who have been persuaded to accept our accolades and thanks in public deserve all the publicity they can get.

“Just saying thank-you is not thanks enough and I was pleased to meet with many of those who gave money for the photo-shoot, shake them by the hand and to say thank-you personally.”

Donations ranged from specially bought toys, to donations from £10 to over £2,000 – including a group donation from North Stifford village, and in all, over £6,000 was raised to provide presents for children who had no guarantee they would open a colourfully-wrapped package on Christmas morning, now, thanks to local generosity they can.