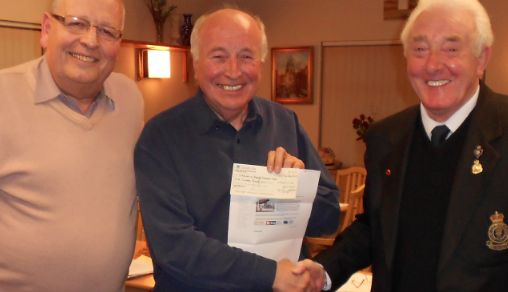 THE CHADWELL St Mary branch of the Royal British Legion were given a very interesting talk by one of the fundraisers for the ‘Stairway to Heaven Memorial Trust’ at their monthly meeting last week.

Derek Spicer, who is their treasurer, has been fundraising for the last six years. The charity is raising funds to build a memorial to those who died in the Bethnal Green tube shelter disaster which occurred during the 2nd World War.

Derek explained how on 3rd March 1943 many local people made their way in the pitch dark of the blackout, to file in an orderly manner, down the steps of the unfinished underground station which had been used as a deep air raid shelter since 1940. At 8.27 pm the searchlight went on and three buses unloaded their passengers at the shelter entrance. Suddenly, those waiting to enter heard the unfamiliar sound of a new anti-aircraft rocket battery firing nearby and they assumed it was deadly enemy bombs exploding. At that moment, a woman with a child fell at the bottom of the wet slippery staircase and others fell on top of her. The crowd above continued pressing forward unable to see what was happening and a complete jam of around 300 people, five or six deep, built up within seconds. 173 men, women, and children died and over 90 were injured; many others suffered life-long trauma and it was the worst civilian disaster of the war.

The ‘Stairway to Heaven Memorial Trust’ is a registered charity and are building a fitting memorial near to Bethnal Green tube station to those who died and will also honour the key role of the Emergency Services. It will depict the stairway where the disaster occurred and provide a space for quiet reflection and space for relatives to lay flowers and wreaths for their loved ones. The memorial has been partially completed but funds are still needed for the ‘stairway’ to be added to the memorial in this, the 70th anniversary.

The charity would welcome hearing from anyone who survived the disaster, lost someone, or know anyone who might have been connected to the incident. This information will be kept in local archives and libraries for the public and future generations to view.

The charity are happy to give talks to local schools and organisations about the Bethnal Green disaster and life in London during the 2nd World War.