Six boxers were out representing Team C.S.M. over the weekend and all six Won.

Davey won his bout by a unanamous decision. Davey is a very fit boxer and has learnt to come forward enabaling him to mix it up in bouts by sitting on his back foot and using his strength against his opponents when needed. Next up on the same London Show was Klayden Russell-Meade 12yrs 34kg who boxed against A Ishfaq from Southend A.B.C. Klayden won his bout by a majority decision “Ginge” as named by his team mates is proving to be quite a talent. He is quite a character in the Gym so it is very refreshing for the coaching staff to see this boy putting it all together in the ring.

Levi Lee 14yrs 57kg, Jay Healy 13yrs 42kg and Jake Healy 13yrs 40kg all attended The quarter finals of the National Schoolboy Championships held at Harlow Dog Ttack on Sunday 10th February. Lee and Jake Healy both received walkovers on the day and Jay Healy boxed against C Mansell from Hemel Hempstead winning his bout by a unanamous decision seeing all three through to the National Semi Finals held in Portsmouth on the 17th February.
Club chairperson Sindy Overy said that to have three Local Boys in this stage of such a prestigeous competition is such a massive achievement for a small unfunded club and would like to personally thank the coaching team for their commitment which enables the youngsters to reach such potential.

Kieran Redding 20yrs 60kg is through to the Eastern Counties round of the Senior A.B.A Championships making him The Elite Essex Champion for 2013. Redding will be boxing next in The Eastern Counties round of the championships to be held at New Astley in Suffolk on the 1st March. Redding is a very experienced boxer that has had nearly 60 bouts since joining the gym at the age of 11. He is a great aspiration to the younger boys in the gym and helps out whenever possible. He.. attends most of his team mates bouts making him a very popular all rounder in the gym. Team Captain Redding has a very good chance of winning the Elite Senior A.B.A’s this year and the whole of the club are very much behind him. 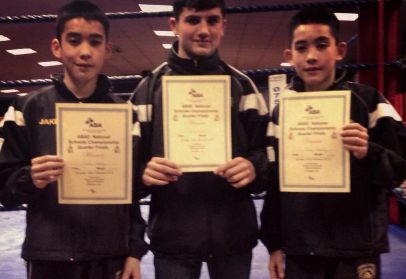