THE funeral service will take place today of one of Thurrock’s great characters and a war hero.

Reg Lee passed away on Wednesday, 13 February and his death has prompted a wealth of stories to be retold and tributes paid.Reg was involved in the  Normandy landings in 1944 and was took part in some of the most intense fighting as northern Europe was liberated.

On his return to Thurrock he became involved in local politics, winning election to Thurrock  and Essex  Councils and serving in several offices, including being Borough Mayor between 1995 and 1996.

He was chair of Thurrock Council’s environmental services committee at the time of gaining unitary status.
Among many who have paid tribute to Mr Lee was former Borough MP Andrew Mackinlay who worked closely with his Labour colleague for many years.
He said: “Reg Lee was a brave British soldier . He was rightly proud of his wartime service. He was involved in some of the bitterest fighting in Northern Europe in 1944 and 1945.

!He bore the scars and endured the  memory of that conflict ,and the very severe wounds he suffered in the  Netherlands, during the the closing months of WWII.

“Reg (and his late wife Joan) served Thurrock with great distinction  during their Mayoralty.
“My party and the people of Thurrock owe him a debt of gratitude for his long service as a councillor in Aveley.
“He was a loyal and consistent supporter ,and friend, to me during my  period as an MP – in the good times and bad! For that kindness  alone, I shall always be grateful to him.”

Mr Lee’s funeral service takes place today (Thursday) at 12.45pm at West Thurrock Chapel and will be followed by cremation  at Corbets Tey Crematorium at 2pm

The funeral party will then retire to the The Fleet at Purfleet from 3pm to celebrate Reg’s life. 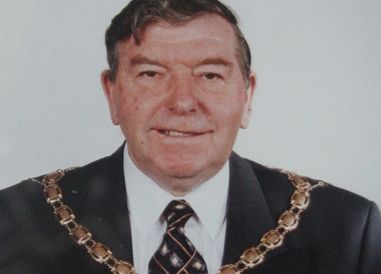 The family have requested no flowers and donations to be made to Upminster Care Home.

Tributes to Reg Lee: Former mayor and war hero added by peterg on March 8, 2013
View all posts by peterg →