WE HAVE been acknowledging a number of the businesses who won awards at the Thurrock Business Awards recently.

Among the winners was Ian Colley, who scooped two awards: New Company and also Young Entrepreneur of the Year.

We believe that Ian was the only sole trader business to win an award.

“A few weeks ago we found out that we were made finalists in two categories in the Thurrock Business Awards 2013. After rigorous inspections and questions from the independent judges we were left to wonder whether we had done enough to win, especially given the extremely high level of competition we were up against!

Bearing in mind I have personally never been to a “black tie” event I must stress I was very nervous about attending such a marvellous event. When me and my fianceé first arrived we were greeted by a champagne reception and made our way to our table. Our table was near the back of the hall so we was not too sure whether this was an “omen” or whether it just meant we had a further distance to possibly trip over!

The awards ceremony itself was of the highest-class and reminded me personally of a mini-oscars. The event co-ordinator reminded us of the extremely high level of entrants this year and how lucky everyone was to be at this stage. We saw a fantastic indoor firework display followed by a well presented video of the judges, the businesses and their processes.

After this opening presentation the first award was about to be announced… New Company. The judges were introduced on stage and reminded us of the tough choices they had, but one company did shine out. They then announced the winner… (after a pause of what seemed like 3 hours) … IRC Direct Website Services! To be honest it did not sink in at first and took around 10 seconds until I realised (after the lovely ladies around our table poked and prodded me saying I had won. I took to the stage (without tripping thankfully) and the judges presented the award to me and I had my picture taken for a 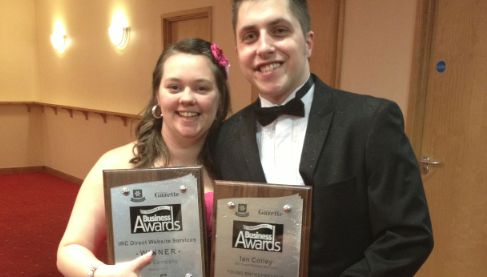 Later in the evening we got around to the individual awards. They announced the Young Entrepreneur of the Year award was next and how prestigious this award is. The judges from South Essex College were introduced on stage and mentioned once again how the level of competition was incredibly high but one finalist did stand out because of the dedication, determination, passion, drive and complete knowledge and understanding of their business. They then said “and for the second time tonight” and my whole body nearly collapsed. I was announced the winner and I must say the applause was deafening! Once again I made my way to the stage and was greeted my warm smiles and handshakes from the judges. I had another picture taken and made my way off the stage. As I left the stage the judges from the other category was there with massive smiles and handshakes to congratulate me on a double-award win in my first ever awards ceremony. It was truly emotional and an experience I will never forget!

At the after party I spoke to many local businesses and also had the opportunity to speak to the judges once again. Although I have to admit I perhaps drank a few too many drinks this was nothing compared to the level of pride and adrenaline running through my system.

I would personally like to take this opportunity to thank the judges from “Play 2 Learn Day Nursery” and also “South Essex College” for the 2 awards that I have won. I would also like to thank each and every finalist and business at the Thurrock Business Awards for making the experience so special, competitive and enjoyable. I am truly honoured to have received the two awards and will ensure I continue the highest levels of customer service, high quality website designs and low prices in the future.

IRC Direct Website Services have now been entered into the countywide awards for Essex and will find out within the next couple of months whether we are a finalist in these awards also.

SO if there is anyone looking for a reputable website designer who takes pride in offering bespoke website design whilst adhering to high levels of customer service and competitive prices, look no further. Choose the double award winning Essex website design company… IRC Direct Website Services!