Arena Essex: Hot to trot as season gets underway

AFTER a moderately successful 2012 at Arena Essex, where she raced despite having registered at another promotion, Lauren Overy kick started her 2013 campaign, now as a fully licensed PRI Arena Essex driver, with a heat and final win and four trophies from her efforts during the afternoon in the Junior Mini Stox.

The simmering feud between track champion Dan Newman and Reid Murray boiled over in the first heat with Newman getting Murray sideways on the back straight before Murray took Newman into the armco without letting off. Newman was unharmed and able to steal a march on his rival when he returned to the track, Murray disqualified from the remainder of the afternoon due to the illegal manoeuvre .

Visiting Incarace star, Ryan Polley had a good afternoon with second place in the final backed up by an allcomers race win, whilst Alfie Jones backed up his recent success at Wimbledon stadium with another heat win.

In the Lightning Rods the pace of Anthony Lawrence proved to be a revelation as he took three race wins during the afternoon, including the final. He seemed a class above the rest as he mastered the changeable weather conditions and was able to pass inside and outside on his way through from the back of the grid. New driver to the class, Ashley Birkin was the only other man to see the chequered flag during the afternoon. Birkin had been racking up the test mileage in preparation for his debut and his efforts paid off when he was able to fend off a closing Lawrence in heat two.

Track champion, Paul Whiteman won the final in the National Banger class. Nearly 40 cars was a good turnout for a domestic affair with a not entirely low key championship affair not too many miles away in London. Some meaty crashes were exchanged, not least as the brotherly pairing of Dale and Lee Hughes renewed acquaintances with Billy Page and Chris Mcauley, with a pair of big head on collisions between the protagonists. Heat wins went the way of Billy King, Lee Hughes and Jack Tuffen whilst the short lived Destruction Derby between Dave Palmer and Darren Haines was settled in the formers favour.

The Easter weekend sees a double header at Arena Essex. Easter Sunday 31st March sees the National Bangers headline with support from the Stock Rods and SuperBangers. Meanwhile, Bank Holiday Monday 1st April sees the return of the Rookie Bangers, with a large entry expected, along with the return of the Lightning Rods and Mini Stox. Start time for both meetings is 1:30pm. 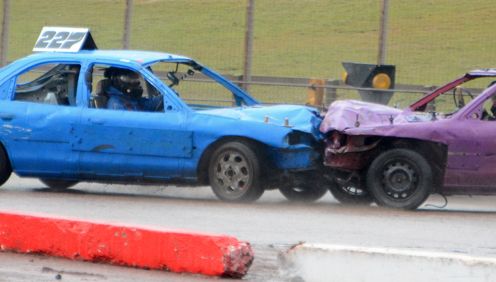