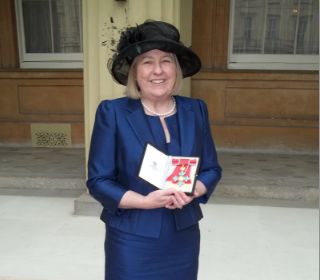 ANGELA O’Donoghue, Principal and Chief Executive of South Essex College, was awarded her CBE at Buckingham Palace by the Queen last week, for her services to Further Education.

Whilst waiting in line to collect her award she found herself stood next to Olympic medallist and fellow CBE recipient, Victoria Pendleton, and the two had a good chat and exchanged stories of previous visits to the Palace before meeting Her Majesty.

This was the second visit to the Palace to meet the Queen for Angela, having previously been awarded the Queen’s Anniversary prize when she was Principal at Sunderland College. This time Angela was rather fittingly wearing a royal blue coloured outfit.

Of the day Angela said Her Majesty had clearly done her homework: “The Queen asked me where I was Principal of and said it must be a very tough time in Further Education at the moment with all the funding constraints. It was a really special day and a real privilege to be awarded the CBE and have my work in education recognised.”

Not that Angela is about to start taking a back seat. She became Principal and Chief Executive of South Essex College last August and is spearheading the College’s ambitious new build projects in Southend, Thurrock and Basildon to help future-proof the education needs of students in south Essex for years to come.