Both swimmers recently, retired from competitive swimming, Katherine Stephens and Rebecca Hayes, collected their awards from Club Chair, Ray Moore, last Friday. The girls have both been part of Thurrock Swimming Club for over 10 years. 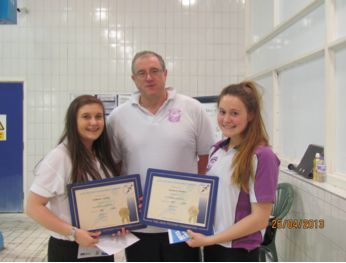 Katherine started swimming from the age of 5 and carried on through the various learn to swim coloured hats until old enough to race competitively at the age of 8. The club soon realised that the butterfly and IM were her strongest events and by the age of 12 she held titles at County, Regional level and gained 11 out of 13 National qualifying times. At Nationals she made two finals; the 400 IM and won a bronze medal in the 200 Fly.
Since then she has been an active member of the various squads both in the pool and latterly in open water attaining medals at both county and regional levels.

16 year old Rebecca Hayes is a level 1 Teacher and Lifeguard with the club and a former National qualifier in the pool and at Open water. Rebecca has won several titles at County and Regional level in the pool, where she still holds a county record at 1500m and a 6 year old Regional record at 400m Freestyle. At Open Water Rebecca won 5 Regional titles and 5 Essex Titles in five years from 800-5000m.

Recently, both Katherine and Rebecca qualified as ASA Level 1 Swimming Teachers and are now enjoying passing on her enthusiasm and experience to the up and coming swimmers in the club.

Both girls are currently deciding how to spend their £200 award which will be on something which will benefit the whole of Thurrock Swimming Club – well done girls.