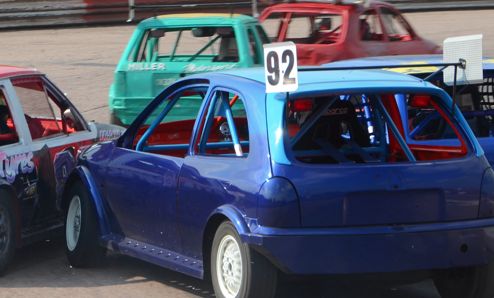 A GREAT entry of close to 60 National Bangers competed at Arena Essex on Sunday, despite the attraction of the World Final for the 2 Litre class in the Midlands.

It was obvious that much of the action was going to centre around the warring Cream Team and the Gladiators, as both brought an army with them. The Gladiators headed by the recently returned Phil Smith and the Cream Team entry rounded up by Nathan Roberts.

Heat two was where the warring took a serious turn for the worse with Andrew “Puddy” Milner getting run into the fence and then trashed by Jamie Harding before Bobby Wilmer steamed in a lap later. The heavy latter impact knocked Milner out and resulted in some delay as he was safely extracted and rushed to hospital, where he remains with a fracture to the base of his spine and broken pelvis.

It was a subdued atmosphere as the consolation gridded, but as the green flag flew it was business as usual with Jack King getting some big damage from Chris Walsh and Marcus Sprawling. This was one of the quieter races on the day although Billy King followed Mark Munson in the fence at the end, as Dave Barwick motored to the win.

The final saw Luke Hardy spun up onto the inner kerbs in the early laps where he lay stranded until a wayward Ricky Hutton knocked him clear. In fact Hutton was the star of this race, continually slowing to a stop on the pit bend and taking damage from several members of the Gladiator team. His badly crabbing car would do one lap and then repeat the process until it could barely move no more!

Alfie Lee won the final, his third straight final win. A feat not many can match in Arena Essex’s history. Jack Tuffen won two races during the afternoon which will help move him up the points chart, many of his rivals having not such a successful afternoon.

The Destruction Derby was an apt end with Nathan Roberts, Jamie Harding and Darryl Theedom  continually pounding anything painted in the traditional Gladiator whitewash. Matthew Young and Jamie Batchelor looked strong but Harding managed to outlast them all, removing a wheel from Young’s car to take a classy victory.

It looked all set for a Matt Mates whitewash in the Stock Rod formula as he romped to victory in heat one from his advantageous grid position. However his lead in heat two was cut when a big pile up on turns one and two left Paul Haralambou stranded. This closed the field up and David Burton was able to get past for the win. Burton knew he had to move fast to beat Mates in the final but a brave dive around the outside of Jamie Lee-Potter on the first bend, just failed to reap benefits and instead he spent a little longer getting through the pack, Richard Haines actually getting under Burton for second place as Mates took the win. The allcomers race saw Haines victorious, slipping up the inside of Mates in the early laps.

The next action at Arena Essex is on Bank Holiday Monday with the National Bangers back in action along with the Lightning Rods and the Junior Mini Stox. Start time 1:30pm.