The first match practice turned into a match as training concluded with a keenly fought match.

The winners were the team in orange. The team produced football similar to the brilliant orange of the Dutch team of the seventies!

The first half was a full blooded affair. Tony injured his leg but was soon up just to see Martin score two great goals.

For the rest of the half the orange team struggled to keep up with him.

When the second half of the game began both teams came out strong with Kevin pushing forward to score the first and Tony to score soon after, but Michael soon put Green ahead again with a good shot that left Danny standing still.

After a few near misses by both sides Lee took on three opposition players and slotted the ball into the back of the net bringing the score level again until Kevin put the Orange team ahead, closely followed by Martin levelling the score.

Andrew injured his arm when Tony kicked the ball hard at it but he was soon back up. 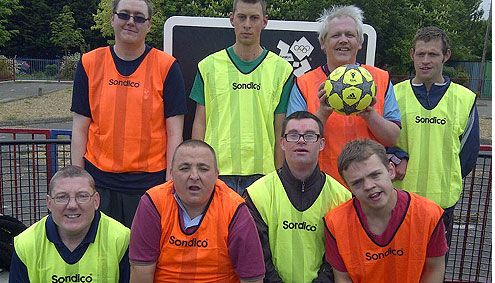 Just when the final whistle was about to blow Michael caught the ball in his hands conceding a penalty which was expertly slotted in by Tony.

Everyone had fun with only a few clashes and are excited about their next match.