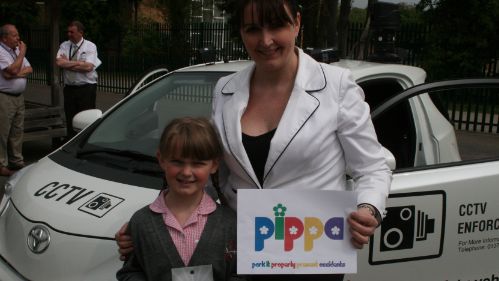 Thurrock schools had a visit from Pippa last week – that’s Park It Properly Prevent Accidents … and not Middleton.

When Thurrock Council launched its six-month CCTV vehicle trial, local schools were invited to come up with a name as the car’s main aim is to try and bring an end to dangerous and thoughtless parking outside schools.

The winner was eight-year-old Jodie Fullerton, from Grays a pupil at St Thomas of Canterbury primary in Ward Avenue.

Her suggestion, PIPPA, won the competition and on Tuesday, portfolio holder for public protection, Cllr Angie Gaywood – with her shadow, Cllr Simon Wootton – visited the school with the car.

Jodie won £25 of Decathlon vouchers and her school received £100 of vouchers to spend too.

Cllr Gaywood said: “There was a really overwhelming response to the competition, with more than 650 entries overall.

“All of them were looked at very carefully and we would like to say a very big thank you to all the school children who took the time to enter.

“We know, when we have taken Pippa to some of our schools. that the pupils are really excited to see her – I don’t expect parents who do not take the time to park with care will share the same excitement – but the message is clear: please park properly to keep our children safe. Do that and you won’t get a ticket.”

She added that Pippa will be seen outside all local schools working hard to keep the children safe.

Cllr Wootton added: “We are asking parents and guardians to think carefully about how and where they park when they are taking or collecting children near schools.

“The best option – of course – is walking, but we know that is not always practical, so if you are going to drive please remember to park legally and safely’’