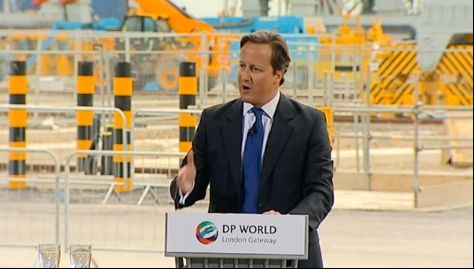 The prime minister used the event, which saw Marks and Spencers become the first company to use the logistics park as its base, to outline his vision for the country, both home and abroad.

The speech, for many, seemed to have one eye on the general election, even though it is two years away and many of the references to globalisation, seemed to be both compliments to the investment made by the Dubai-based company but also a broadside to the “Little Englanders” perhaps a reference to UKIP.

Mr Cameron’s speech used the transformation of the land in Stanford-le-Hope as a metaphof for what the country could do, if it continued to walk the global stage. He made reference to not being drawn into seductive arguments to the contrary but rather wanted us to look at a decade of delivery.

The prime minister continued to talk up what had been delivered in three years and what could be achieved. The economy was “healing” said Mr Cameron whilst extoling the virtues of his policies of capping benefits, controlling immigration and a new national curriculum.