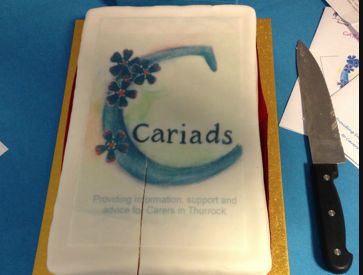 THURROCK Council is funding a new organisation in an effort to expand the services it provides for carers across the borough.

CARIADS (Carers Information and Advice Service) was launched at the Beehive, Grays, on Tuesday (11 June) by Mayor of Thurrock, Cllr Tony Fish.

He told guests at the event how, when he was the council’s portfolio holder for adult social care, he had been involved in drawing up the council’s carers strategy.

He said: “One of the key findings was that there were many thousands of carers providing an invaluable support for adult social care, without which it could not function properly.

He said one of the major problems was that carers did not know how to or where to access support – “it was clear we needed to revamp our information and advice service”.

The mayor added: “So now we have CARIADS where advice and support in all situations is more easily available.”

The vision is for CARIADS to continue to support current known carers and to identify others. The service’s main base will be at Thurrock Mind in Bridge Road, Grays, but the intention is to be in the community at different drop-in centres around the borough, making it easier to find and for CARIADS to make new connections.

The Carers Centre in Cromwell Road, Grays, will still remain, providing services such as respite and specialists support groups.

One Response to "Cariads: New carers service launched in Thurrock"