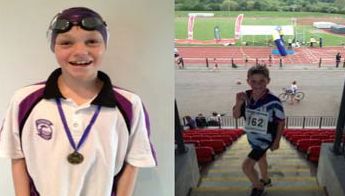 The journey was definitely well worth it for the talented 11 year old who not only claimed two Gold medals in the 50m and 100m freestyle long course events, but also broke and recorded National records for his age group.

Kieron is no stranger to bringing the medals back to the Thurrock borough having earlier in the year collected two Golds and one Silver in the National Pool, Ponds Forge in Sheffield in the relay, 100 Individual medley and 50 butterfly respectively.

Kieron also competed in the East Essex Triathlon at the beginning of June and came 29th out of 57 competitors in his 11/12 age group and achieved 10th in the swim!

Not to be outshone by his club peer Harry Millsom from Thurrock’s Olympic 2 Squad finished 12th in the Triathlon and 5th in the swim, showing the all round versatility of the Thurrock youngsters.