Ascot Ladies Day with a twist for Little Havens at Orsett Hall:

Last week, the charity’s ladies-only event, ‘Ascot with a Twist’ kindly supported by Coco Fashions returned to the Grahame Thomas Pavilion within the beautifully landscaped gardens of The Orsett Hall Hotel for the seventh year running.

Starting with a drinks reception, the ticketed event included a three course meal, afternoon tea and evening entertainment with ‘play betting’ on a live stream of the Ascot Ladies Day.

JTroop Butlers kept the fizz flowing, Michael Buble cover artist Joe Fryd provided entertainment for the ladies and adding to the glamour of the event and Leanne Jarvis, a contestant on this year’s BBC The Voice UK wowed the crowd with her performance. Nanny Pat from hit reality TV show The Only Way is Essex was also there to show her support, asking for donations in return for a photo with the OAP star.

Mum, Sarah Allison, 34, from Grays, has been to the event for the last six years. This year, Sarah spoke to guests on the day about how money raised from the event helps families who turn to Little Havens in the most difficult of circumstances, like her own.

Sarah and her husband Luke had Febe, their first daughter in December 2005 but that New Year’s Eve she had been diagnosed with a rare condition called Trisomy 13 which caused apneas – episodes where she stopped breathing. The family was referred to Little Havens Hospice for respite care.

Although they were told by doctors Febe wouldn’t make it to her first birthday, she defied the odds by smiling and laughing throughout her short life. Febe died in the early hours of 12th December at Little Havens Hospice – her first birthday.

Sarah says, “It was like a dream after that. Everyone said she would never even live until then but our little hero made it, against all odds. We all stayed at Little Havens until the day of Febe’s funeral. They were just brilliant. They helped with the funeral arrangements, flowers, registering Febe’s death, made all of the appointments; everything. I don’t know what we’d have done without them.

“I’ve been to every Ascot with a Twist event arranged by Little Havens and this year I wanted to tell my story to inspire the other ladies and let them know that their donations really do make a difference to families like mine who are facing the most devastating time of their lives. Little Havens and the Care Team there helped us create special memories for Febe that we will treasure forever.”

After hearing from Sarah, many ladies at Ascot with a Twist released balloons outside Orset Hall as a tribute to Febe and all the children cared for by Little Havens. The event has raised £35,000 which will go to ‘Making Every Day Count’ for seriously ill children like Febe.

For more information on Little Havens Hospice and how you can support its care please visit: 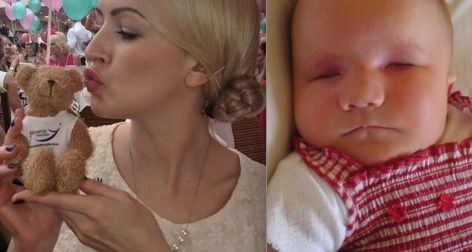 RESIDENTS can sail to London on a new river...

RESIDENTS can sail to London on a new river...