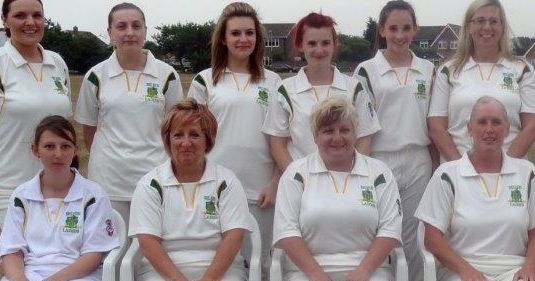 BELHUS Ladies made their home debut at North Stifford with a much more polished display in their second of two fixtures with their near neighbours. The home batting was solid and the fielding was sharp. Belhus batted first and opening batsman Allison Edmeades struck two fours in an impressive innings of 14 not out to be her team’s leading scorer in the two recent fixtures with the Havering-based club. Edmeades was eventually bowled by Hannah Charman (1-10), with 39 runs on the board in the ninth over.

Although no other Belhus batsman reached double figures, opener Sarah Fergey hit one boundary in an innings of six runs until she was caught by Upminster captain Jackie Hilton to become one of three Lauren Evans’ victims, while Laura Knight looked impressive, striking two fours towards the close the innings to finish with nine not out.

Evans completed a double wicket maiden for Upminster when she bowled Crystal Gansbuhler for just two runs and Tracey Fairweather without score to finish with three wickets at a cost of just four runs from three overs of pace.

Niamh O’Byrne picked up the wicket of Jackie Norris with her first delivery and finished her two-over spell with figures of
1-12, while Annabelle Davies claimed the wicket of Rhiannan Jefferies.

After a short break, Upminster staged a steady, but confident response, though three run outs were not in their script.
Visiting captain Hilton, who scored a fine half century in the previous week’s meeting, was on her way back to the pavilion after just three balls, but the dismissal was a touch fortuitous. Hilton struck the first ball of the innings for four, then hit a single, which brought Davies to the striker’s end. Davies played a textbook straight drive when bowler Gansbuhler managed to get a hand to the ball and deflected it on to the wicket at the bowler’s end. Hilton was short of her ground and Upminster had lost one of their key batsmen with just five runs on the board. In her next over, Gansbuhler accepted a return catch as the Belhus bowler finished with 1-12 from two overs.

But these two dismissals led to a 64-run partnership for the third wicket between Michelle Dixey and Evans. Dixey hit three fours in an innings of 25 and Evans held the fort for a solid knock of 20 not out which included one four. Dixey was run out at short mid-on by Knight, while the impressive Belhus fielding continued as Rachel Cordell dismissed Hayley Chapman for just one run by a direct hit which glanced the top of the bails from a distance of some thirty yards. However, there were no more dismissals as Upminster gained victory by six wickets with 4.3 overs to spare as Laura Davis joined Evans to finish six not out at the call of ‘time’.