In frightening scenes, unions members saw Mr Johnson’s car as it sped up the Manorway in Corringham. They rushed across the road to create a human roadblock.

The group of twenty protestors then surrounded the car in which the mayor was a passenger and harangued him.

Mr Johnson sat impassively in the car which was unable to go forward as two men stood directly in front of the vehicle.

One man then got onto the bonnet of the vehicle as it started to move away.

A member of security from DP World tried to reason with the protestors and they finally let the mayor on his way back to London.

A spokesperson for DP World said: “DP World London Gateway fully respects the legal right and free choice that all London Gateway employees have to belong to any union (including Unite). Likewise, if a majority of our people wished to be recognised, we would respect their wishes and enter into further discussion with the relevant union. We have met Unite three times in the past 12 months and made this point on each occasion.” 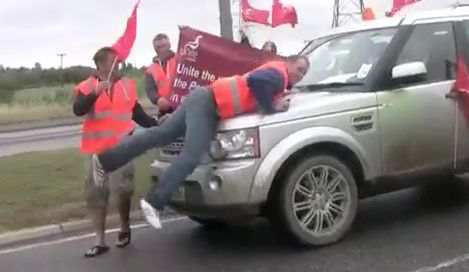