TILBURY made it two consecutive victories with 3-1 victory over Brentwood Town. Despite the game never being in doubt, the players on both sides endured heavy conditions with the persistent rain. Tilbury made just one change from the midweek win over Burnham with Lee Weemes going out due to injury, giving Piers Wixon his competitive debut for the Dockers.

Both sides had early chances, Rees for Brentwood and Cutler for Tilbury. In the 30th minute, Brentwood had the best chance of the afternoon when a shot went towards goal only to see Joe Christou superbly clear off the line. From the next attack, the visitors took the lead when a speculative effort towards goal hit former Brentwood defender Sam West and past the helpless Marrable. Within 60 seconds, the home side equalised when Ryan Blackman played in Christou who ran through strongly and fired low into the net. Within a minute of the second half Ryan Blackman fired home from 25 yards after receiving the ball from Sam Cutler. On 62 Tilbury made the game safe, when debutant and substitute Francis Babalola crashed home at the second attempt following a blocked effort from Christou. With 10 minutes remaining, Tilbury should have increased the lead when a Waters corner found Sam West unmarked, but his effort went over. Tilbury continued to pressure late in the game and took a well deserved 3 points.

Manager Paul Vaughan commented “Great to have two wins in a week. A dogged performance in difficult conditions. We hope to keep up this momentum in the next few games. I was delighted with the performance of Joe Christou.” 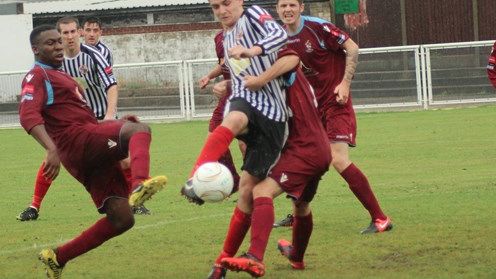 Tilbury are back in action on Monday afternoon, when they travel to Chatham Town with a 3.00pm kick off.