Over four years for lorry driver who killed motorist on M25

A GERMAN lorry driver has today (Friday) been jailed for four and a half years after admitting killing an east London motorist in a road crash on the M25 in Essex.

A 40-ton lorry, driven by Anton Maizen, struck a line of queuing traffic on the clockwise carriageway of the motorway near Aveley at 12.30pm on Tuesday, April 2 leading to a multi-vehicle collision involving four lorries and six cars.

The driver of a Renault Clio, 79-year-old Ronald Moughton from Lowbrook Road in Ilford, was certified dead at the scene. Ronald’s son, 59-year-old Keith Moughton also from Ilford, was the front-seat passenger in the Clio. Carol Boulton, a 47-year-old woman from Basildon, was the driver of a Mercedes A-Class. Both Keith and Carol are recovering from their injuries at home.

Anton Maizen was arrested at the scene and subsequently charged with one count of causing death by dangerous driving and two counts of causing serious injury by dangerous driving. The 58-year-old man from Wixhausen in Germany pleaded guilty to these charges at Basildon Crown Crown on Thursday, July 25 after which he was remanded in custody prior to his sentencing at the same crown court on Friday, August 30.

Anton Maizen regularly drove lorries in the UK on this route. He had been at work for nearly 23 hours and driving for nearly 15 hours of this 23 without a break, thereby putting himself and other road users in danger.

The 840-mile journey had begun in Germany, with Maizen entering the UK via Folkestone. He then drove to south London, before continuing on his way to Lincolnshire. He was returning to the Channel Tunnel when the crash took place on the M25.

CCTV clearly shows the scene and other drivers slowing and safely coming to a stop on the slip road. During his police interviews, Anton Maizen was unable to explain why he struck the rear of the queue at his maximum speed of 56mph. He hit a BMW, which contained a mother and her young son, propelling it into another lane and into the path of a lorry.

Anton Maizon’s tachograph charts were found hidden behind the driver’s seat and again later when officers carried out a search of him in in police custody and found a chart in his sock.

The charts showed the route he had taken during the period leading up to the crash which police traced back to his operating centre in Germany. This was corroborated by CCTV and electronic transactions in the UK and Europe.

Senior Investigating Officer, Insp Keith Whiting, said: “We believe drivers and owners of foreign and British commercial lorries will take note from this tragic incident that those who disregard the law and the safety of vulnerable people in smaller vehicles around them will be brought to justice, face a prison sentence and a lengthy disqualification. We also believe that people who were disrupted for several hours as a result of this crash will appreciate that the complex and meticulous investigation undertaken by Essex Police’s Serious Collision Investigation Unit was justified and has successfully brought a driver to justice for causing one death and serious injury of two other road users.”

Road policing officers are continuing with their enquiries into the owners of Anton Maizen’s lorry to ensure they have not contravened European driver hours regulations.

Anton Maizen was also disqualified from driving for five years and ordered to take an extended driving test in order to regain his licence. 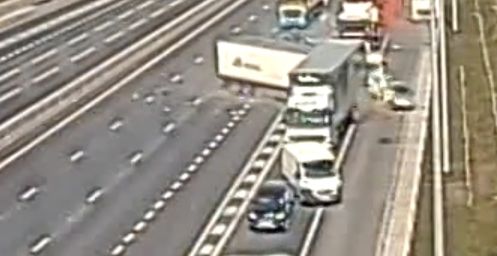